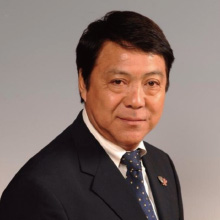 The chairman of Yokohama FC
He was born in Kazuno City in Akita, 1952

He is the first Japanese football player successful at Bundesliga, Germany that was referred to one of the world highest league throughout 1970s.
He has achieved satisfactory results as a regular player at 3 different soccer clubs during 9 years in total.
They praised him for the accurate and firm playing style in Germany and gave him the nickname for "Oriental computer".
He played 6 times in total at International match held by UEFA and the record was the best among the Asian players until Mr. Shinji Ono crack the mark.
He won the first goal as an Asian player at UEFA Champions Cup, currently UEFA Champions League in the season 1978/1979.
He tells that he makes many football players take Dr's Suiso by which they acquire physical strength and playing speed in order for Japanese players to aiming at the top players in the world.
He is introducing Dr's Suiso to foreign countries at present.