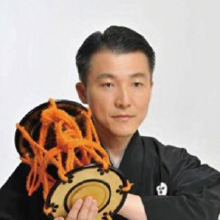 A holder of Important Intangible Cultural Asset of Noh
He was born in Setagaya, Tokyo in 1967

He decided to choose the typically Japanese art,thinking that Japanese culture is most adequate to Japanese people when he watched Japanese Musical at the time of high-school graduation.
He has experienced inspiration of Nogaku when he saw himself in the mirror.
He applied to 2nd batch of student on the training course of the National Noh Theater, which recruits once for 3 years.
He started to get training of Noh he had never experienced three months later.
He received the gracious words " Good Play" from H.E. Tamamadonomiya, Imperial Prince Norihito at the Stage of Noh for Morisawa Yuji's Independence when he became independent in 1999.
He was transferred to ICU due to cerebral infarct during the stage of Yang Kuei Fei, in 2010 despite everything that was going very well.
He passed very uneasy days with a sudden brain deficit because Noh has to be played without any charts.
He then met Dr's Suiso and could also improve pollen allergy drastically.
He could recover self-confidence, escaping from anxiety against the sickness.
He is now coaching not only in Noh and also in other fields.